Thanet and the First World War

11th November 2018 marked 100 years since the First World War ended. In commemoration, we thought we’d share the Isle of Thanet’s Great War connections and the extraordinary role that the Isle and its people played between 1914 and 1918.

The message that war was to cease at 11am on 11 November 1918 was sent from Dover to the naval base at Ramsgate Harbour at 9.45am that morning. The townspeople were informed by ships’ sirens, fog horns and whistles.

Charles Fretter (1879 – 1964), who became a Birchington resident towards the end of his life, was the first person to receive word from France confirming the end of the hostilities. Between 1916 and 1918 he was stationed at Dover Castle, on wireless communication and signalling duties. As soon as the message came through, he followed the correct protocol by informing his immediate superior and saying nothing to his colleagues!

In June 1914, a Royal Naval Air Station seaplane base, opened at St Mildred’s Bay (formerly Marsh Bay) in Westgate. An airfield on adjacent farmland followed, becoming operational in April 1915. But it was not suitable for night flying and became too dangerous to land there, so a year later, on 29 May 1916, the airfield moved to Manston. Learn more on a digital discovery

By 1917 Manston airfield had grown to include four underground hangars, its own railway line to Birchington, a power station to generate electricity, barracks for 3,000 men and even an indoor swimming pool. The WWI seaplane lookout can still be seen at St Mildred’s Bay. Discover more about the history of the airfield at the RAF Manston History Museum.

Caring for the Wounded 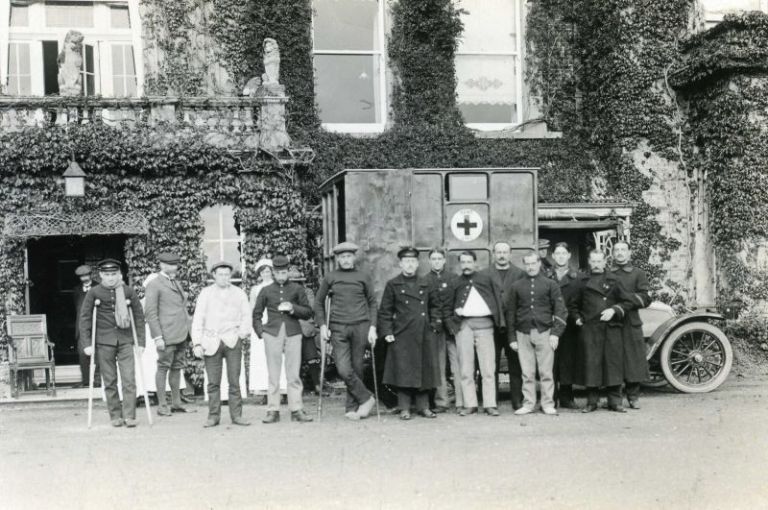 In October 1914, a telegram to Birchington notified the town that 100 wounded soldiers were on their way, by train, in need of emergency hospital accommodation. This marked the transformation of Quex Park into a Voluntary Aid Detachment (VAD) hospital. 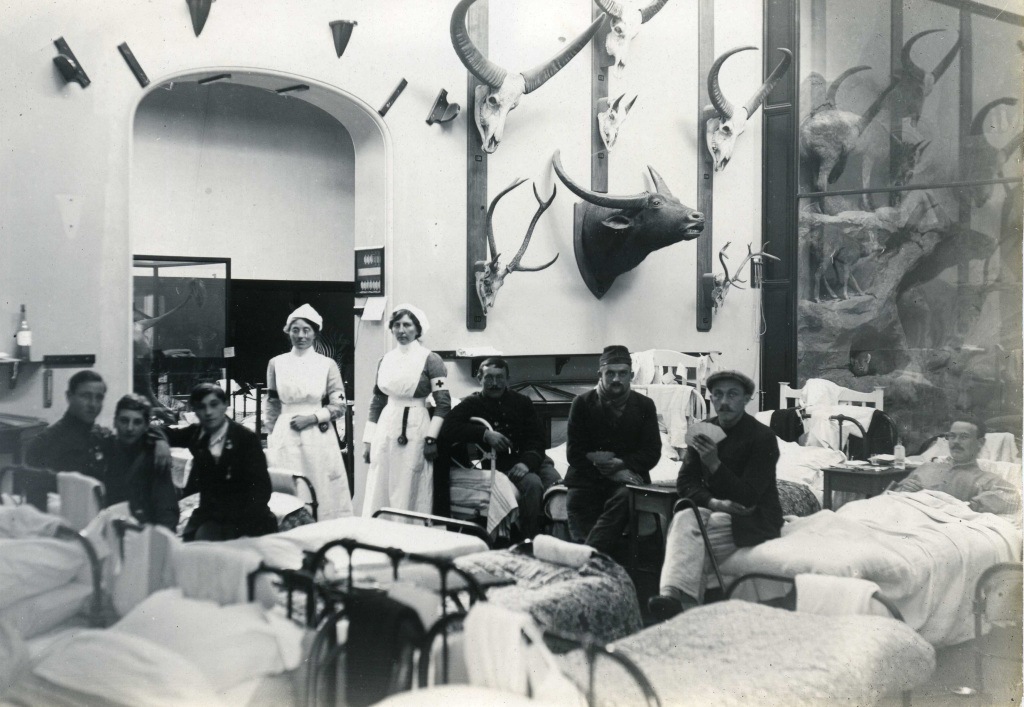 The first patients were Belgian soldiers, with Major Powell-Cotton’s own domestic staff taking care of cooking and laundry. Quex was one of 80 VAD hospitals in Kent and remained open until January 1919, treating hundreds of patients of varying nationalities. 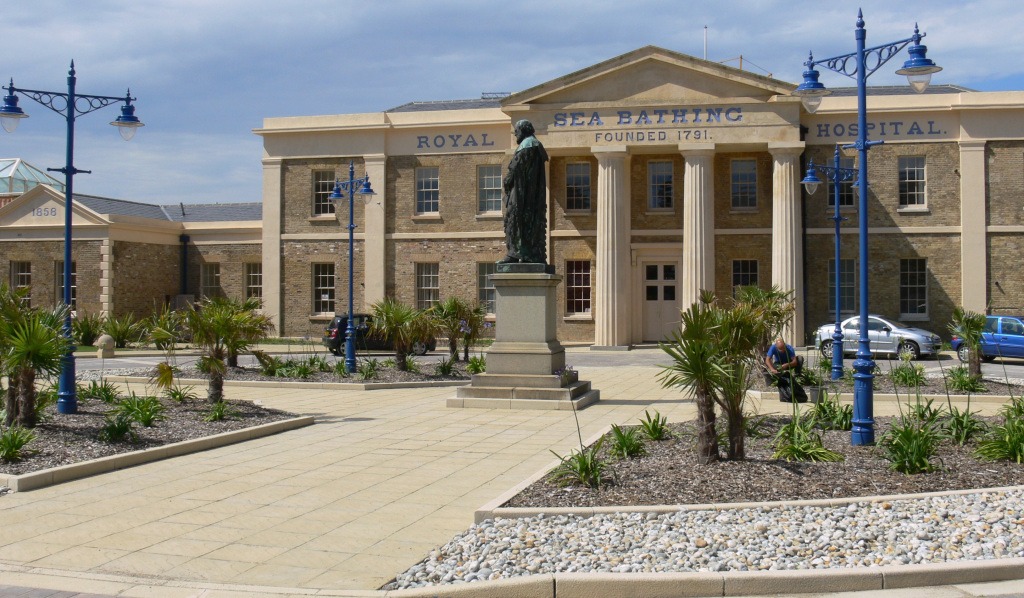 The Royal Seabathing Hospital, Margate was used to treat the wounded from French and Belgium battlefields.

Yarrow Home in Broadstairs was used as a military hospital during the war. The building is now the Yarrow Hotel based at East Kent College.

“The most bombed seaside town in England” 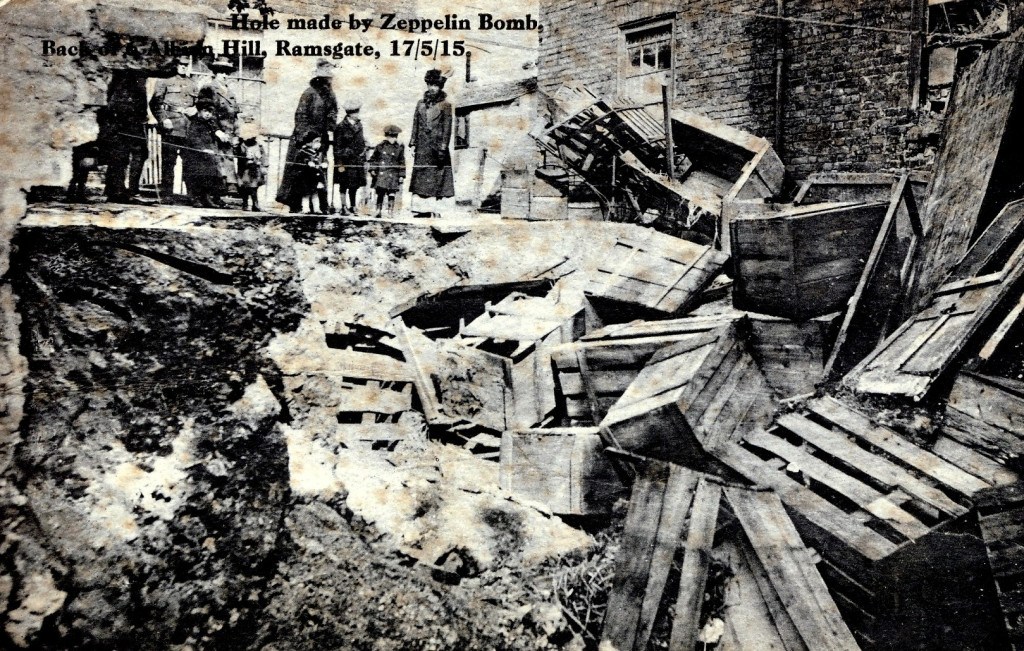 Ramsgate was the first town in the country to experience a zeppelin raid and was repeatedly hit due to it being on route to London bombings.

On 16 June 1917, a German LZ42 Zeppelin dropped a 650lb bomb that landed on the fish market near the harbour Clock Tower, which the Royal Navy was using as an ammunition store, causing a massive explosion. 700 houses were damaged and 10,000 windows were shattered across the town. By the end of the First World War, the town had been given the unenvious title of ‘most bombed seaside town in England’.

Margate suffered too, and pictures of the damage caused by the downed zeppelins can be seen in Margate Museum’s War exhibition. 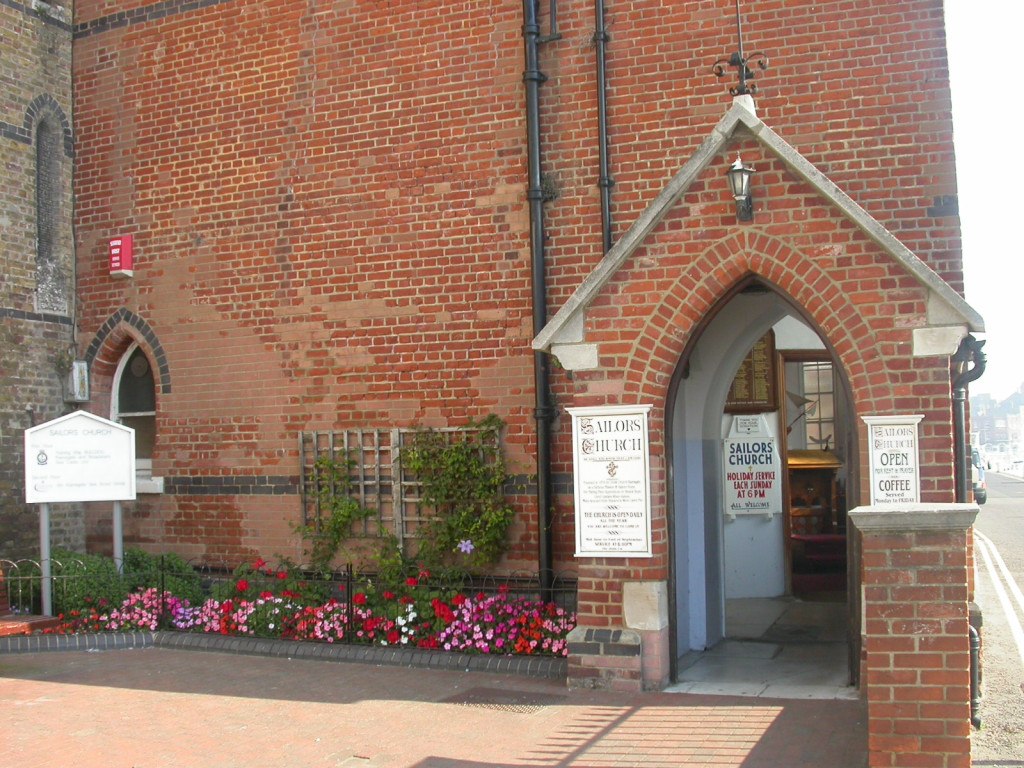 The Sailor’s Church and Harbour Mission at Ramsgate Harbour

In 1914, a sloping passage was cut from the cellars of the Vicarage of Holy Trinity Church in Margate, so that the residents could use the Margate Caves, (closed at the time), as an air raid shelter. Trinity Church was subsequently destroyed during the air raids of the Second World War.

3,300 survivors of the First World War are known to have been fed, clothed, sheltered and medically treated at The Sailor’s Church and Harbour Mission at Ramsgate Harbour. Built in 1878 by Canon Eustace Brenan, vicar of the nearby Christ Church, the mission was intended for spiritual guidance and physical help for the men and boys who made up the crews of the sailing smacks who fished out of Ramsgate in the nineteenth century. Like many buildings in Thanet, its original purpose took on new meaning during wartime.

Many women and men in Thanet died during or as a result of the First World War. They are remembered on memorials and in cemeteries across the Isle, such as St Peter’s WWI War Graves, which offers tours, and Margate Cemetery.

There are a number of services and parades happening to across Margate, Broadstairs, Ramsgate and the Villages to mark Armistice Day

Visiting the Isle? Why not follow one of our Frontline Thanet itineraries.